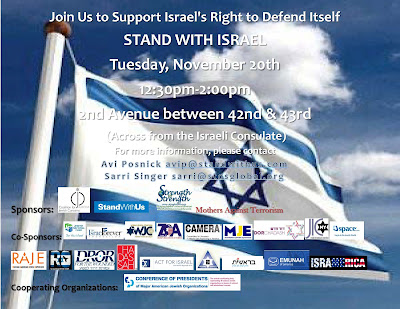 I have been asked to change the focus of my address and speak on behalf of Mira Scharf, Chabad representative to New Dehli, India, one of three victims in the attack on Kiriat Malachi.  Aharon Smagda and Yitzchak Amselam were also killed by the rockets.  Remarkably, their death coincided with the anniversary of the murder of Rivky and Gabi Holtzberg hy"d in Mumbai in 2008.
﻿
﻿
Posted by Shimona Tzukernik at 1:14 PM

It's shocking how America's left-wing media only shows one side of the spectrum, of how Israel is bombing innocent civilians, and not showing the basis for why Israel is bombing! If terrorists choose to live in their family's home's, yes, they're risking their families. For some reason Israel constantly gets the criticism for being too harsh. They need to stick up for themselves! I'm definitely coming to the rally to show my support!